Kit Kat is this chocolate bar invented in 1935 and bought by Nestlé. It’s a bestseller everywhere in the world. In most countries, you’ll find the original milk chocolate flavour, sometimes dark or white chocolate when there’s a special limited edition, but that’s about it. And then there’s the fourth dimension of Kit Kat, yes, there is Japan. Cucumber, watermelon and salt, English mustard or bubble gum flavours, the Japanese can do anything.

The mythical chocolate bar is undoubtedly Japan’s favourite, far behind all other brands. The recipe is simple: Nestlé has chosen to position Kit Kat as a local product, adding regional flavours coming from the different prefectures of the archipelago, such as wasabi in Shizuoka or potato in Hokkaido. Every flavour is sold in one particular place, its region, for a brief time. With this daring marketing strategy, Kit Kat has managed to rule the confectionery market in Japan. It works on three fundamentals you need to know about Japanese people.

First of all, the Japanese love to travel in their own country. And when they travel, they have to bring back some presents. The tradition of gift-giving is still very much alive. It will have to be a beautifully wrapped souvenir, usually food, and it has to be a local product. For instance, if your colleague Mariko has been to Hamamatsu for the Golden Week, she literally has no choice but bringing you back a gorgeous box of eel pies, the regional delicacy. If she doesn’t, you’ll be entitled to wonder if Mariko is not a terrorist. Or a bitch. Or simply if Mariko is really Japanese.

The other great tendency of the Japanese is compulsive collection. The have money to spend, they love everything that’s new and they want to have it all. So Nestlé has adopted a very clever strategy: making new Kit Kat flavours, as much as possible, playing with the ideas of time and space. Every special flavour will be available during a short amount of time in one particular place. It’s the “limited edition effect”, the best way to pressure Japanese consumers who are already, by definition, about to buy. 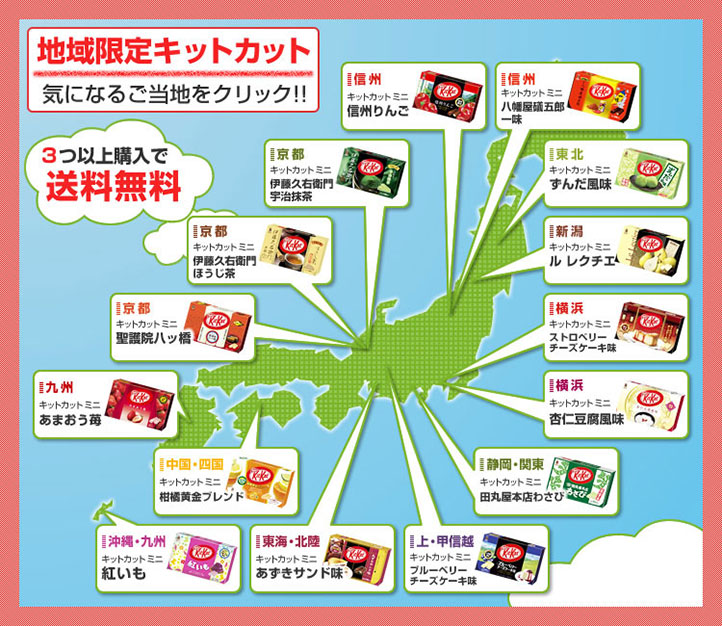 But that’s not all. Japanese people having very peculiar tastes, they have flavours that don’t exist anywhere else all year long. They are sold on a national scale, like green tea or strawberry Kit Kats. The best way to distinguish the national Kit Kat from the regional Kit Kat is actually the place where you buy it.

First, there are the everyday shopping places, like supermarkets or convenience stores, called kombini here. There you’ll find the classics, such as Kit Kat original – the milk chocolate one – or the other national variants like green tea, dark chocolate or strawberry. Then you have souvenir shops, located around airports, train stations and highway stations, where you’ll be able to get crazy regional limited editions.

There has been dozens of flavours, some of them are audacious, even interesting; some others are completely absurd, to the point that you could call it genius. Some of the most memorable include miso, soy sauce, sparkling strawberry, chestnut, wine, edamame, corn or apple vinegar, and the list could go on for a while. There are some very good sites dedicated to the Japanese flavours of Kit Kat, such as Oyatsu Break or Jen Ken’s Kit Kat Blog.

In general, special Kit Kats are in fact made with white chocolate; food colouring and flavours are then added. That’s the case for the strawberry or the matcha versions. But sometimes things go further and you’ll find some made with milk chocolate and flavoured white chocolate, like the ones I had bought a few years ago in Hokkaido: they had a sort of zebra pattern, half milk chocolate – half orange chocolate with a melon flavour.

All of this being said, what are the current special editions of the Japanese Kit Kat? Just follow me, we’ll have a tour of Japan in pictures. We’ll start gently with the national flavours. Then it will get wilder.

This time I’m not on a complete tour of Japan so I haven’t been able to take pictures of them all. Other versions are available, like purple yam in the islands of the south, apple or chili pepper in the Shinshu region, sunda (mashed green soy beans) in the north-east, pear in Niigata, hojicha (grilled tea) in Kyoto etc. If you don’t like these flavours, just wait five minutes, the next one is never very far…